Today’s youth should be considered ‘change makers’ who, if given the knowledge, could spark family conversations on the subject of organ donation and ultimately assist in raising the number of organ donors in the UK.

With thousands of people in need of a transplant, we need to make sure everyone understands the need for more organ donors. The UK currently has one of the lowest organ donation consent rates in Europe and three people die each day because of the shortage of donated organs.- Sally Johnson, NHS Blood and Transplant Director of Organ Donation and Transplantation

In order to address this serious issue, it seems one solution would be to get people talking about organ donation and ensuring that they know the wishes of their family members. The subject is not an easy one to discuss with children and most parents feel uncomfortable talking about death and mortality with their kids. However many children are fully capable of understanding the concept of organ donation and have their own personal opinions on this subject.

The NHS Blood and Transplant, the special health authority responsible for organ donations is a firm believer that the youth can affect the number of organ donors and by educating them the number of donations would rise. The NHS has created an education pack to be used by teachers in the school curriculum that will give children an understanding of what organ donation is all about and encourage them to start the conversation with parents.

Sally Johnson continues, “We believe education has a vital role to play in addressing people’s concerns about organ donation. Our research has highlighted the important role young people can play in stimulating discussion and debate in the family. By creating this education pack we are giving young people the facts about organ donation. We hope that this will not only make them think about what they would want to do themselves but it will also start discussions with their own families and friends.”

According to NHS Blood and Transplant, in situations of possible organ donation, 47 per cent of parents approached by hospital staff when there is no hope of their critically ill child recovering refuse to donate their child’s organs, compounding a critical donor shortage.

Why we need to have the talk

In some cases, parents feel unsure of what their child would have wanted and are reluctant to let them down by allowing their organs to be donated. According to Dr Paul Murphy, National Clinical Lead for Organ Donation. “The desire to protect their loved ones at the most vulnerable times is incredibly intense among parents. Those who see beyond their grief are truly inspirational.”

Ilse Fieldsend, who was faced with the tough decision of donating her three year old daughter’s organs when she was pronounced brain dead, explains why people should discuss organ donation, “there are some parents who have to decide on the spot, which is why it’s good for people to be educated about this issue, so they don’t have to talk about it for the first time when something horrible happens”.

Educating the youth on organ donation would encourage discussion among peers, parents and family which would not only raise awareness of the organ donation cause, and make each family member’s wishes known to their loved one, but could also make the decision easier for the family if that tragic situation were to occur.

How to start the conversation

If you are interested in starting the conversation with your kids, take a look at the Orgamites guide on how to talk to children about organ donation, as well as the NHS’s education pack for educating kids on organ donation. 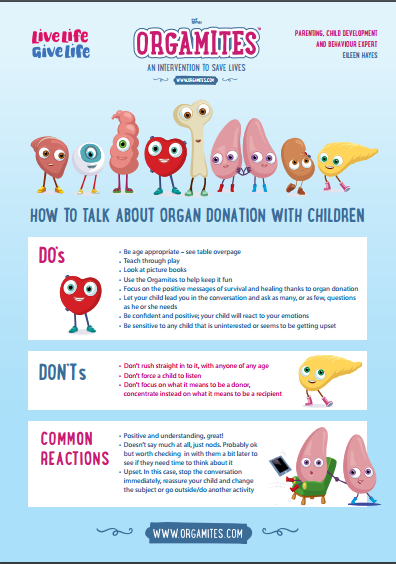